Although our country owes much to the many brave men and women in law enforcement who have devoted their lives to protecting the “flock,” we must realize that they cannot be everywhere at once. There is a reason they have been referred to as the “thin blue line.”

Whether we like it or not, in a matter of seconds our public places can become extremely dangerous. Everyone must then become shepherds and protectors of the flock.

While the politicians in Washington D.C. continually debate over what needs to be done regarding mental illness in America, the remainder of Americans remain largely the unprotected targets of extreme violence. In a study conducted between the years of 2000 and 2013, the FBI found a significant rise in mass shootings throughout the United States.2

Of the 64 “mass killing” episodes during this studied time period, the majority were located in centers of commerce with the second most common areas being educational centers.2 Despite these areas being the top two locations, the study found nine more significant locations that attracted violent criminals. What this means is that criminals can strike anywhere, at any time, and for any reason.

The study also found that the active shooter is generally an “insider,” meaning they are usually a student or employee of the location they target for their violent crime. Interestingly, in 13% of these incidents, unarmed and armed citizens successfully and safely disrupted the shooter, ending the violence and saving countless lives.

The Importance of Training

In the study’s conclusion, the FBI voices their understanding that although avoiding these situations is the best choice, people may unwittingly become victims of a violent crime. Therefore, the FBI emphasizes the importance for law enforcement officers (LEOs) and civilians alike to receive formal training to prepare them for these increasingly likely situations. They assert that, “It is important … that training and exercises include not only an understanding of the threats faced but also the risks and options available in active shooter incidents.”2

Not so surprisingly to many Americans, most of the studied incidents ended before LEOs arrived.2 So what can we do? Thankfully, we can be reassured that trained individuals, civilian and LEO alike, that are present during the unfolding of an active shooter incident can successfully and safely stop these crimes before they claim the lives of the innocent.4

For this reason, the Forward Movement Training (FMT) Center is calling upon all businesses, schools, and individuals in the Boise, Idaho area to take their responsibility to protect their employees, students, and loved ones seriously. They ask all people to become educated and trained in active shooter and workplace violence response as this training can save your life as well as the lives of those you love. 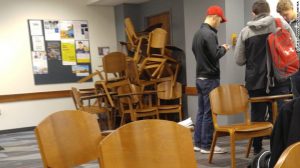 The importance of active shooter response training is illustrated by the mass stabbing incident at Ohio State University in November, 2016, where, fortunately, no one was killed. The appropriate and wonderful response by the students, faculty, staff, and LEOs were fundamental in the ultimate life-saving outcome of the incident. Ohio State University took their responsibility to their students, faculty, and staff seriously by establishing a plan, training according to that plan, and implementing that plan when it became necessary.3 Countless people owe their lives to this training and implementation.

Please watch the following videos to better understand how training like this can benefit you and those you are responsible for.

In 2008, following a two year ecclesiastical mission, Ricky chose to focus his professional endeavors on firearms and firearms education. In 2010, Ricky graduated from the Colorado School of Trades with an associate degree in Gunsmithing. Since that time, Ricky has practiced as a gunsmith, built machine guns for foreign and domestic militaries, and owned and operated a Concealed Carry Weapons (CCW) business in Colorado. Currently, Ricky is pursuing a master’s degree at the University of Idaho in Recreation, Tourism, and Sports Management and is the Marketing Director for Forward Movement Training Center in Meridian, Idaho.

Preventing the next School Attack…
December 12, 2018
Former Swat Member Brings Tactical Training to the Masses
October 11, 2017
Are you Prepared to Defend Yourself After the Shooting Stops?
March 23, 2017
Hollywood vs. the Real World: What is Your Reality?
March 14, 2017
The Concealed Carry Reciprocity Act of 2017: The Founders’ Intended Protection or Overreaching Federal Mandate?
February 3, 2017